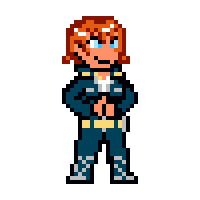 Bastet done by myself, inspired by Angelica Rogner from Kiseki

Personality
Overall nice, has a knack for adventuring, enjoys tokusatsu (live action series), tends to be quite the tomboy, but still displays interest in dresses and cooking. Has a hard time resisting the temptation to touch dogs or any being that reassembles foxes or wolves. Often seen riding her bike or training with a wooden sword.

Situation
Lives in the residential area, has a small house with a decently sized garage where she also does some maintenance for others. Makes enough money to live comfortably.

Body
Last weighed 82 kilograms (180.8 lbs), lean build, slightly tanned skin, a tattoo of a winged serpent on her back.

Face
Nothing remarkable about her face other than triangular chin.

Tomboy: Likes action-packed series (mainly tokusatsu/live-action), favors men's clothes, prefers to ride her bike and brawl.
Adventurous: Long strolls through the forest, hiking, exploring the unknown, getting into (some) trouble... Bastet sure loves going places and meeting other creatures.
Animal-lover: She loves animals, mainly dogs. But when foxes and wolves are involved, she gets even more eager to come closer and pet (provided it's safe to, of course).

Additional Information
Despite her tomboyish attitude, Bastet isn't all against dresses and has looked into some herself. Tends to sleep for less time than usual but takes naps when she needs a little boost.

Spellcasting
+ Minor Elemental Conjuration
+ Minor Examples: Creating a wisp of fire comparable to a lighter, changing the shape of small (hand-sized) portions of soil or stones, creating faint streams of water comparable to a super soaker, cause wind to blow from a spot.
+ Major Examples: Summoning fireballs or water bubbles as big as a person's head, changing the shape of soil or stones within a couple meters, creating a person-sized tornado.
- Minor Condition: Gesture - Needs to dial the spell on a cellphone and create a circle on the air with the other hand.
- Minor Condition: Focus: Cellphone - Bastet must have access to a functioning cellphone to dial the spells, and it follows an incantation system inspired by a kind of Japanese wordplay known as Goroawase.
- Major Condition: Incantation - She must spend a minute and either a few seconds beyond that or thirty seconds on calling out a contract with the spirit of nature responsible for the element she is conjuring.

Core Advantage
Curse of the Orochi Maiden - Bastet can assume a Lamia-like form, gaining snake-like traits such as pit vision, increased strength to match, and the lower half of a serpent (although in Bastet's case, it starts a little under the belly button) that can extend for up to 5.5 meters (18 feet), covered in mystical white scales that changes colors based on the angle one looks at it. However that comes at a cost...

Core Disadvantage
Orochi's Seal - Using Orochi's power causes the other powers to become sealed temporarily, and even after she returns to her human self Bastet may find herself unable to control the air or cast spells for something between minutes and a whole hour depending on how long she stayed in her Lamia form.

Nerfs and Flavor
While in Bahamut's Envoy form she gains a 3.5 meters long cetacean-serpent hybrid lower body, similar to dolphin but with distinct scales, making her more like a dolphinoid merfolk.

Housing
A small house with a garage in the residential area.

Place of Birth
North of Japan