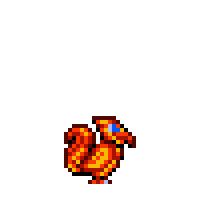 Appearance
Looks like a blue-eyed phoenix with a build similar to that of a bald eagle, while being slightly taller than one.

Personality
To most acts no different from a bird and has a fixation for singing. Some may hear him actually talk and learn he has plenty of interest in non-extinct species. Rarely dips into a “robotic” mentality and tone.

Abilities
Electricity control, capable of projecting memories of the past from his database. And of course avian abilities like enhanced sight and flight.

Situation
No residency yet, nor any wealth. He's a bird, what did you expect?!

Body
Has the same body shape of a bald eagle, but with long tail feathers that are similar to that of a pheasant.

Face
It’s like that of an eagle, nothing to note.

Other
Sleepers will see a golden pheasant instead.

Songbird - When keeping the act of a bird, Fenico acts cheerful, singing vigorously, feeding on small animals, insects and seeds, etc. There isn’t really a whole lot of things that sets him apart from birds.
Species-Curious - Particularly of non-extinct ones, since he is a living database of extinct species’ memory. His curiosity extends to him searching databases all by himself if needed.
Extinct Subcon - The hidden side of Fenico, a cold and calculating AI that only informs on queries and hardly makes any query on his own. This side of him comes out rarely when he is sleeping or when he is low on energy, but can be induced if told to by his owner.

Additional Information
Fenico sounds a little bit like a noble, carrying a slightly effeminate tone, at least while conscious. While the subconscious has a voice that is more digitized and gender-neutral. Secretly he aspires to be able to hold more than just data on extinct species, even if that means losing his innate ability.

Core Advantage
Reprisal of Extinct Memories (REM) - Fennico’s innate ability allows him to create a playback of things in his database, which can go from something as little and simple as showing how a small living creature that has once gone extinct would interact with the immediate surroundings, to something as big and complex as replaying a conversation that happened between two individuals within a living room while someone used a vacuum cleaner.

The playbacks are intangible projections with sights and sounds Fenico heard, inclusion of captions, and even selection of which details to highlight or disregard at his discretion. As such, said projections can produce its own lights and shadows, as well as block them, giving the illusion of tangibility in some scenarios.

Recording any evidence of these projections is impossible, as it either comes off blurred or with artifacts that greatly diminish its credibility (such as looking like cheap edits).

Nerfs and Flavor
Electronic Interfacing - The way Fenico connects to electronics is by the feathers of his tail, which acts as a connector, allowing him to interface with many types of connectors and also serving as a way to charge himself (connecting to a power outlet, that is). That makes him capable of moving each feather of his tail independently, although it lacks grip.

Elemental Form (Data) - When going around as a “digital ghost”, Fenico becomes translucent blue with electric sparks similar to lightning harmlessly seeping through his feathers.

Enhanced Senses - Only benefits Sight, not any other sense.

Occupation
Bird. And a living database of extinct species.

Art Credits
Banner sprite solely made by me.