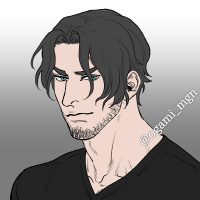 Made with Picrew (Artist: Ogami_MGN)

Body
Fair-to-tan skin, Broad-shouldered and in good shape. Heavy scarring on legs and lower back. Left leg missing below knee, wears a prosthetic.

Other
Accent tends towards Maritime Canadian. Teeth not as noticeable to Unawakened.

Independent - Used to relying on himself. Keeps secrets almost too easily. Can be stubborn. Believes in personal freedom.
Steady - Reliable. Not prone to drama or big displays of emotion. Quiet and Deliberate. A shoulder to lean on.
Social Introvert - Enjoys being around people, but needs a retreat. Prefers not to be in the spotlight. The backup. The wingman. Has fun watching people having fun.

Additional Information
Kind of a workaholic. Writing a fantasy novel in his spare time, but nothing published yet. Knows a bit of guitar and a smattering of various languages.

- An only child, with a single father in the Canadian military, Tom spent a lot of time traveling or with relatives.
- Mostly taught by tutors/homeschooled. Made a few friends, including online friends, but was never particularly close to anyone outside of family. Tom planned to join the military himself after graduation.
- Attacked and bitten by a werewolf at 15 while camping near his current residence. His legs were severely injured, requiring partial amputation and lots of therapy.
- His first full moon he put his blackout down to accidentally taking too many painkillers. Even when he saw the news about another animal attack nearby, he assumed it was the same wolf that injured him. Too sore to notice any extra injuries.
- Tom began blacking out once a month and getting sick from most food. His doctors believed it was an allergic reaction to his medication, and when it continued they were just as unsure as he was.
- The next few full moons were fairly unremarkable and it took about a year for a chance comment to make Tom think to film one of his blackouts. He had no idea how to react to the discovery that he was a werewolf.
- Fortunately it was easy for him to lock himself in his room on full moons from then on. And it was not seen as unusual for him to go to bed early, or to fall asleep watching tv. Tom never told his relatives, not wanting to add an additional burden, and never thought of telling anyone else.
- After his discovery, Tom's life continued as normal, except for relearning to walk with a prosthetic and all that entailed. To avoid slipping into depression, with help from his therapist/doctors, Tom kept himself busy and stayed active. He aimed for a trade where he did not have to be stuck behind a desk all day, in spite of his handicap.
- Eventually Tom moved down to Oregon for work, starting in Portland, then ending up in Polaris Pass where he's lived for roughly 6 months.