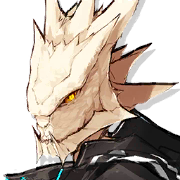 Official art of 12f from Arknights

Situation
Lives with his parents, works at his uncle’s comic book shop

Hair
Instead of hair, he has big bony spikes.

Geek: Hector is a huge nerd. If you name a series, he can tell you something about it. He has Magic decks, and builds gunpla models. He can absolutely talk you to death on just about anything.
Thrill Seeker: Hector is the type of person who jumps first at trying anything new. He also enjoys hobbies such as parkour and skateboarding on top of his more nerdy pursuits
Stubborn: They don’t call him “Bonehead” for nothing. Hector can be hard to discourage once he sets his mind on a goal.

Core Advantage
Bone Headed: Hector’s head is encased in a bone like substance that is remarkably more durable than even the rest of his body. His head is resistant to small arms fire. Give him a running start, and he can smash through a brick wall with relative ease.

Wealth
His family is fairly comfortable. Hector earns money working for his uncle

Hector’s father was a dragon, his mother was an awakened human, though she had no powers to speak of. They eventually made the decision to move to Polaris Pass as they had immediate family there. It was also a good and easy neighborhood to raise a blatantly supernatural child in.
Hector grew up with an appreciation for extreme sports thanks to his cousins. He also developed a similar love for pop culture, thanks to most of the adults in his life. He’s currently in tenth grade, and generally enjoying life in Polaris Pass.